How important can customer perception really be? Article by Dhiraj Wazir 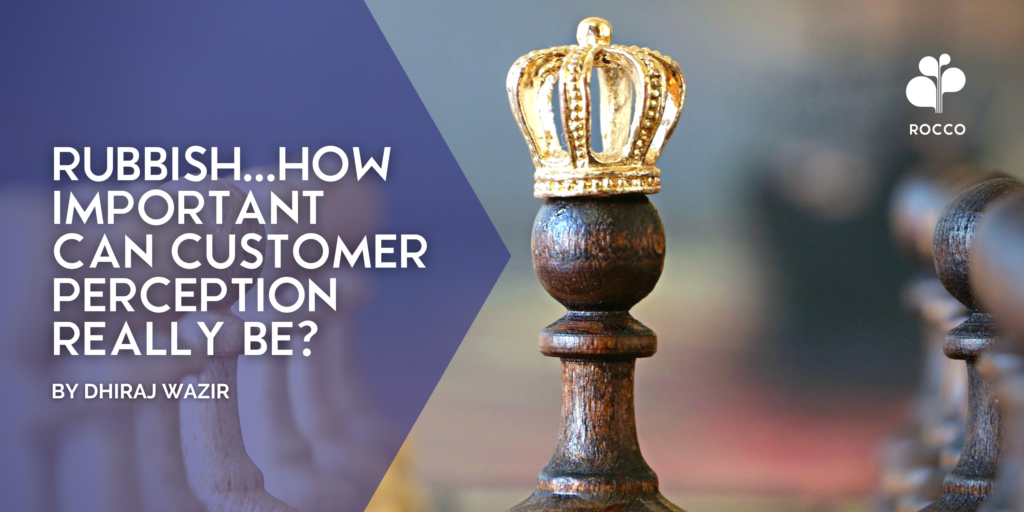 HOW IMPORTANT CAN CUSTOMER PERCEPTION REALLY BE?

“The customer is always right” could well be a tired old cliché, but it’s beyond belief how few of us understand that this is not a statement, but as accurate a prophecy as you can get!

Sure, at a superficial level it just means “give the customer what he wants” … but at a deeper level, what it really means is: “What customers think of you is in effect who you will become”. How many examples do we have of better products failing just because customers perceived them to be inferior and vice versa … from the layout of the keyboard that I type on or the cult case of how VHS became the norm even when Betamax was a much superior format. The business battlefield is littered with casualties of failed products not because they were necessarily any less, but because they failed in the customer perception battles. So perhaps we need to add a corollary to our prophetic cliché to explore its depths: “The customer may be wrong, but she’ll certainly be right at the end”.

You’re still not buying? Here’s a really interesting story which you might be able to relate to.

In the early 2000’s T-Mobile in the UK was struggling with a very peculiar problem. In customer perception studies, it would consistently be rated amongst the worst Mobile Networks in the UK. Whereas Virgin Mobile would consistently top the list. So, what’s so peculiar about it? Virgin Mobile (at the time) was an MVNO fully hosted on T-Mobile’s network! This obviously was really frustrating for T-Mobile UK.  The management was enraged (year after year), at such unfair results. I’m sure you can imagine the choicest words that were used to describe the research agencies publishing these results.

Although heads didn’t roll, but I can tell you that they were definitely hitting against the wall, after all why was the same network so highly regarded when called Virgin but when painted in T-Mobile UK’s colours at the bottom of the list?

It was even more frustrating to know that in reality T-Mobile did have a great network, over the years T-Mobile had invested a substantial amount in its network and perhaps had one of the best networks in the UK but when it came to perception results, their position refused to budge.

Tried as they did, T-Mobile found it extremely difficult to change this perception in the market, and this in effect made it very difficult for them to grow market share. In fact, T-Mobile was virtually ignored by the corporate market, no procurement manager wanted to risk moving thousands of employees (and particularly the bosses) to a network which did not have a great perception. No amount of technical data on the ground could change that.

Relatively low market share and the inability to shift this, was translating into an EBITDA which was well below par, and as you are probably aware Deutsche Telekom finally gave in and decided to sell the business.

The customers although wrong, turned out to be right. Why and how the sale transformed into a merger is a story for another time.

It was a testament to T-Mobile’s network that after merging with Orange, it was actually decided to retain a much larger proportion of the T-Mobile PLMN; it really was a great network. Things only changed after a complete re-brand. The merged entity started fresh, was first to the market with 4G and since then has completely managed to turn things around.

It goes to show that being the best is meaningless unless that’s what your customers are saying about you. Globally businesses spend over $400 Billion on advertising with the aim of shaping customer perception. For any business this then naturally becomes one the top metrics to measure, monitor and shape.

This is exactly what ROCCO’s Benchmarking reports set out to measure and monitor, we provide

the purest, the most unbiased and neutral view that is wholly based on MNO views. In ourlatest “21 Report” we bring together the data from our research to not only talk about opportunities, challenges and trends in the industry but we also present the customer perception data in 3 completely new insightful models.

Do write in to us at hq@rocco.group to learn more about the “21 Report” or about the other services we offer.